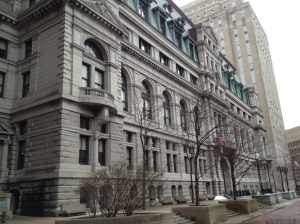 The owner of the property, seeking to substantially renovate the buildings thereon, obtained an “all risk” insurance policy issued by North American Specialty Insurance Company (“North American”) to cover risks inherent with the construction project.  Such coverage was required in the standard form construction contract issued by the American Institute of Architects (“AIA”).  The AIA Contract also contains a waiver of subrogation clause which provides that the Owner and Contractor waive all rights against each other and any of their subcontractors, sub-subcontractors, agents and employees “for damages caused by fire or other causes of loss to the extent covered by property insurance obtained pursuant to the requirements of the construction contract or other property insurance applicable to the work.”  The waiver of subrogation clause also required the owner or contractor, as appropriate, to require the architect, the architect’s consultants and the subcontractors to provide similar waivers, each in favor of the other parties.

The Court also noted the utility of subrogation waivers in construction contracts, stating that they insure cost effectiveness and judicial economy: “A waiver of subrogation is useful in [construction] projects because it avoids disruption and disputes among the parties to the project.  It thus eliminates the need for lawsuits, and yet protects the contracting parties from loss by bringing all property damage under the “all risk” builder’s property insurance.”  The case is also a reminder of the importance for owners to obtain an appropriate builder’s risk insurance policy for a construction project, in accordance with the standard terms of an AIA Construction Contract.

Stephen is a partner and chair of Mirick O'Connell's Public and Municipal Law Group. He is also a member of the firm's Land Use and Environmental Law Group. Stephen provides advice and counsel to clients in various areas of municipal law, including public bidding and procurement, the designer selection law, public construction, contracts, zoning, subdivision control law, eminent domain, the creation or discontinuance of public ways and the state's conflict of interest law. He represents owners, both public and private, in preparing, reviewing and amending agreements for architect's services, engineering services and contracts for construction of medium-size and large-scale projects. He also appears regularly on behalf of clients before local planning boards, zoning boards of appeals and conservation commissions. He represents companies in applying for and obtaining Tax Increment Financing Agreements. Stephen serves as co-chair of the Worcester County Bar Association's Municipal Law Section.
View all posts by Stephen F. Madaus →
This entry was posted in Construction, Contracts. Bookmark the permalink.